Rotary Club of Kincumber, Erina & Terrigal Australia Day Event 2022 short film about the history of the 'Shipbuilders of Brisbane Water'.

​About 30 km north of Sydney Heads is a large bay, this waterway was named by Lt. James Cook in 1770  because of the broken land surrounding it. Broken Bay's 'North Arm' which was the original name and was later renamed after the then Governor of NSW, Thomas Brisbane.
​Brisbane Water is an extensive complex of broad-waters  bays and large estuaries, the total main area being approx. 11kms long and 7 kms wide. The city of Gosford is situated at its north end.
The Brisbane Water has an unequal heritage in Australian shipbuilding history which commenced in the 1820s. The first vessel probably being constructed by Robert Henderson at Veteran Hall, Saratoga. An incalculable number of vessels were built over the next 125 years approximatley, with more than 500 'registered'​ vessels being constructed in the area. The number was probably even greater as some vessels went to Sydney for fitting out and therefore were not identified as being constructed on Brisbane Water. Others went directly to the Islands without being registered in Australian. Vast numbers of smaller, unregistered vessels were also built.
In the 1990s the Brisbane Water shipbuilding tradition continued with Warren Yachts building large fibreglass pleasure vessels in Kincumber Creek, one of the last being 'Aussie Rules' which was built for golfer Greg Norman.
Below: Greg Norman's 'Aussie Rules' built by Warren Yachts. 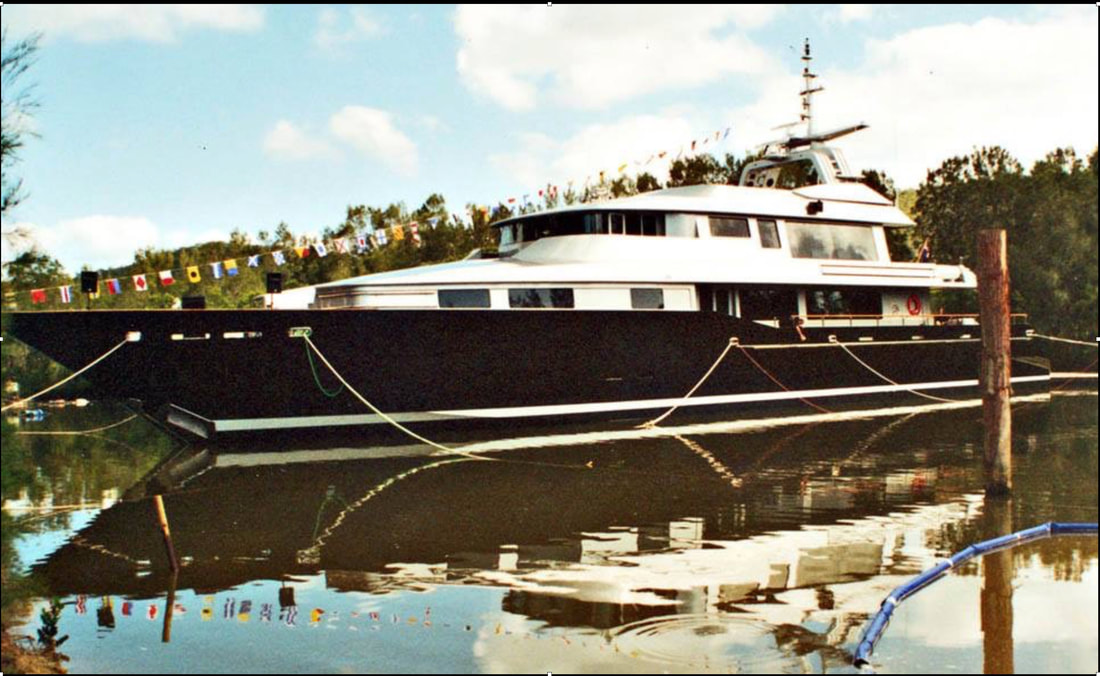 Jonathon Piper was born in Sydney on 1 January 1819 and married Ann Bates at Pitt Town on the Hawkesbury River in 1835. A year earlier his sister Sarah married Joseph Spears the son of a member of the Rum Corps and who, in 1829, was promised 60 acres of land on Brisbane Water.
This grant was at the head waters of Cockle (Kincumber) Broadwater, being identified as being 50 chains and 50 links from the mouth of Kincumber Creek There appears to be strong family ties between the families of Spears and Piper, which probably influenced Jonathan and Ann moving to Brisbane water in 1829. Joseph Spears named his property Brisbania. The Piper home was at the Southern end placing it on the eastern boundary of the Gosford suburb currently called Yattalunga.
The Piper’s influence on regions, waters and use of the land cannot be over stated; they were early full time residents not absent landlords as many landowners were. Also significant was the large number of ships built over a 35-year period. During this time Piper taught the shipbuilding trade to many of the area’s young men including the four Davis brothers.
Jonathan Piper died on 18 April 1879 age 69; his headstone at St Paul’s Church states his birth incorrectly as 1813 but it was really 1810. Ann Piper had 14 children and died in Sydney in 1901 aged 83.
An unfinished ketch was on the Stocks at the time of Piper’s death, so his son William Brisbane Piper, then a shipbuilder at Cape Hawke, NSW returned to oversee its completion. This final vessel from this yard was launched in October 1879; it was the ketch Peacock. 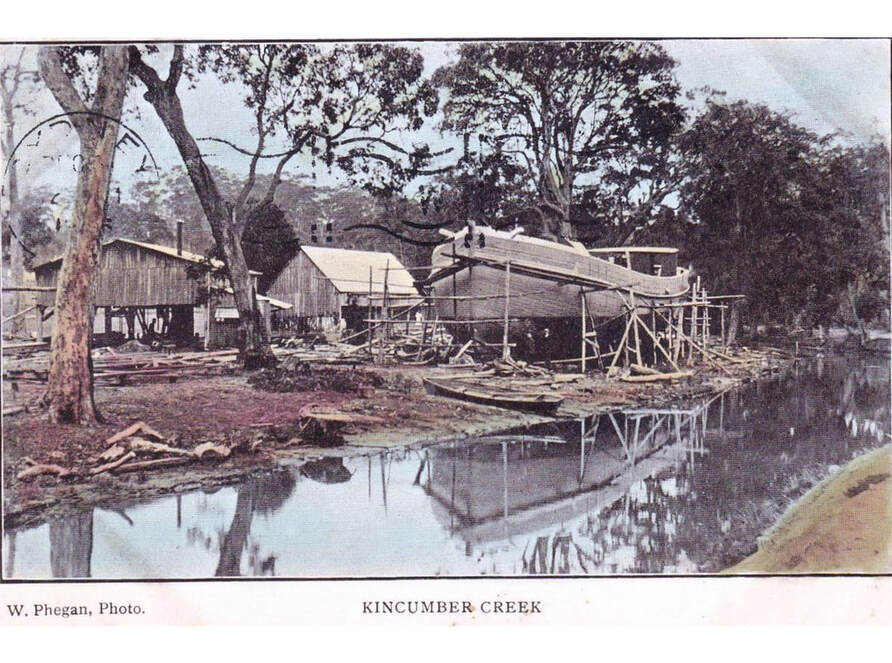 ​George Frost shipyard was on Kincumber Creek about 100m east of today's Frost Reserve .
George Frost moved to the Kincumber area in the 1850’s, he married Elizabeth Woodward in 1862, “Lizzie”, as she was better known, was born and raised in the Kincumber area.  The first vessel that George Frost constructed was the ‘Lizzie Frost’.  Before he passed away at the age of 50, he had constructed 19 vessels, the last being the ‘Rock Lily’ in 1906.
Rock Lily
Type; ketch steamship​
23/1906 ON121137:
Weight: 218g/100n tons
Dimensions: 117.7 x 27.9 x 9.0 ft.
Owners: 1906 George Frost to North Coast Steam Navigation Co. Ltd of Sussex St., Sydney: 1915 Joseph Weston of Sydney, master mariner and James Johnston of Sydney, company manager.
Weston died 26 January 1920, ownership then passed to his widow Mary Weston and partners.
​The register was cancelled in July 1927, the vessel being broken up.
Source:
‘The Shipbuilders of Brisbane Water’ Book - Gwen Dundon
Below: ​Diorama of the Rock Lily being constructed on Kincumber Creek. by Ray Crawley and the boys at Terrigal Mens Shed.

The Davis Family Of Shipbuilders

In 1833 William Davis immigrated from Ireland with his wife Sarah and family to Australia were the family continued to expand. No less than five of the sons became Shipwrights initially as branches of the family grew they centred on Cockle Channel in an area that became know as 'Davistown'.
Moving on, Ben Davis settled on the eastern side of the channel at 'Bensville'. Thomas Davis established a shipyard at Terrigal Haven and Rock Davis established his shipyard at Blackwall.
​At Blackwall, Rock Davis became the most prolific shipbuilder on the Brisbane Water, the yard working until 1913.

​In 1854 at the age of 21, Rock Davis built a vessel with two of his brothers, by 1858 he had built numerous ships. At about this time he established a shipyard at Blackwall, this soon grew into a major shipbuilding complex.
A large roof was constructed over the main slipway, this became a landmark on the Brisbane Water known as the 'Big Shed'. When Rock died of tuberculosis in 1904 aged 71, his son Rock Jr. continued shipbuilding at the site until he died in 1913.
At that time shipbuilding ceased on the site, the abandoned 'Big Shed' collapsed during a gale in 1923. 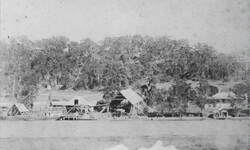 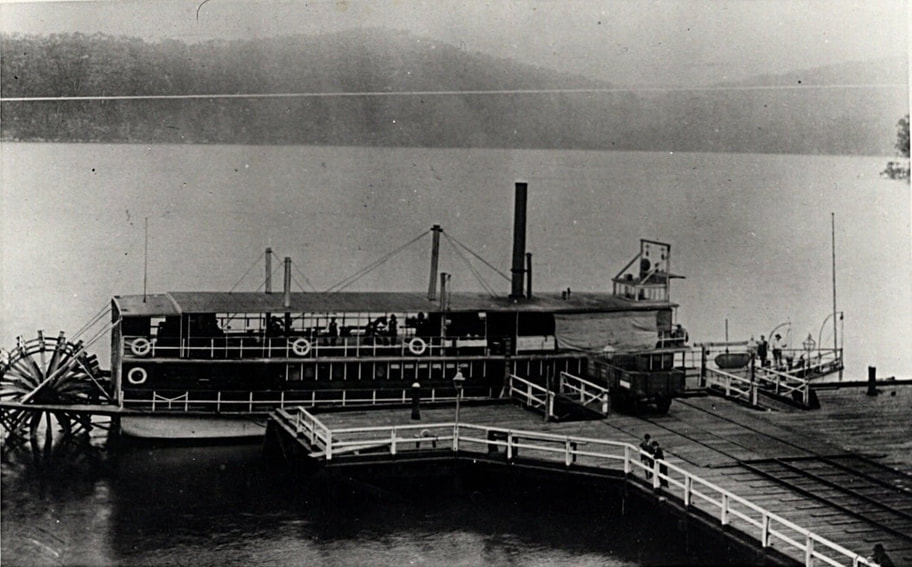 Above: The General Gordon at its specially constructed wharf near Brooklyn on Hawkesbury River.
​
One of the Davis brothers, Thomas, established his yard at Terrigal Haven, where in 1886 he built the steam paddle-wheeler, General Gordon, one of the most famous vessels to ply waters of the Hawkesbury, Broken Bay and Brisbane Water.
At that time the Central Coast contribution to Australia's transport heritage through its great shipbuilding industry was about to be expanded to include a major milestone in the Nation's railway history.
Underway was the digging of Woy Woy Tunnel, the longest tunnel in Australia and also the construction of the engineering marvel of the age, the Hawkesbury Rail Bridge, at almost 1km long and having the deepest piers yet sunk in the world.
​These projects were significant because they filled the last 15kms gap in the 2,700 kms of Australia's great railway project, linking Adelaide, Melbourne, Sydney and Brisbane. While work on these great engineering works continued, the steamship General Gordon travelled down the Hawkesbury River, across Broken Bay and up Brisbane Water to Gosford linking all the nation's East Coast capital cities across that final gap.
Below: The General Gordon model by Ray Crawley and the Terrigal Mens Shed and its Hawkesbury River wharf, models of the adjacent buildings have also been constructed.